Last week, I was invited to speak at the European Association of Political Consultants conference in Milan. My talk was part of a panel called „How to engage and connect with citizens.“ Since a lot of the talks were focused on learnings from the US campaigns from a very American perspective (where things like „Call to Action“ are so common sense no one would mention it as a learning) and I anticipated a „but we don’t have an Obama“ (or similar) reaction, I decided to present seven points, everyone can apply.

7 things US campaigns can teach us about citizen engagement:

1) Give them something to do
I consider this key to online engagement, as does everyone in the campaigning and advocacy sphere, unfortunately it’s something that is still not in everyone’s mind who runs a campaign with a digital component. I actually consider that lack of calls to action to the fact that there’s less of a fundraising culture in Europe. Without any evidence whatsoever, I believe that the CTA culture originates from fundraising and made its way to (online) advocacy from there.
In any case, knowing what action you want people to take and asking them for it is the first step to engage people online.

2) Build a ladder of engagement
Asking them can only be the first step – asking them again (for a little bit more) is the second. This is nothing soly online either – we’ve actually done that always. If an organization has an event and someone’s interested in joining the organization, your first suggestion won’t be „why don’t you become chairperson?“ You slowly lure them in, ask them to come to the next meeting, then to help out at the next event, and so on.
The biggest jump in the ladder of engagement if it starts online is definelty the step to offline engagement. At the re-campaign Obamas Organizing Director Betsi Hoover mentioned that their medium to take activists that step almost always was the phone. A call from a volunteer that invited a person that has been active solely online has been proven to be most effective to get this action offline.

3) Take them seriously
If you ask for engagement is key to offer an actual possibility to change something. People know when they are being fooled, used for a PR tactic or simply not taken seriously. People who get involved don’t want to do the organization harm – even if their suggestion might appear as a harsh criticism.

4) Don’t take them seriously
…if they don’t take themselves seriously. The example I brought in the talk was the online petition to build a Death Star that got enough signatures for the White House to resoond. The response was humorous and yet on message.
Similarly when the German Online Retailer OTTO had an online poll for a new model. Brigitte won. I was a man wearing a blonde wig. Instead of refuting the online poll, they actually did a photoshoot with Brigitte.

5) Forget Big data
In Europe, specifically Germany and Austria, there’s a completely different sentiment when it comes to data protection and privacy. The fact alone that one declares a party when registering to vote is unthinkable. In such an environment, where a lot of data isn’t available and trying to collect it would be political suicide, it’s much more important to utilize smart data: get to know your (email, twitter, Facebook…) audience and don’t treat them equally: segment messages and calls to action to the right audience on your list.

6) Test everything
Every political system has things that have always been that way, things that haven’t been proven to be effective, but to not do them would lead to a rebellion amongst you activists: How can they not have yardsigns?! How can they abolish billboards?
In such an environment it’s hard to change something. If you do and fail, you will lose your job. If you do what has always been done and fail, you are risk free, because „it didn’t work this time“
Testing requires the guts to fail: when you A/B split test two messages, one will by definition fail. Still, it’s the only way to actually find out what works online for you and what doesn’t. (Since its so cruicial, I will write about and how to AB Testing in a future blogpost)

7) The Internet is not just Facebook and Twitter
You might find 80% of your audience there, but to actually engage with all of them, you will have to look in other channels (or maybe even offline!)

Here are the slides: 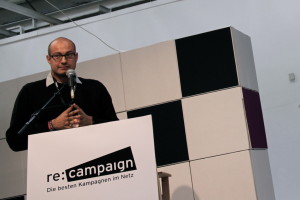